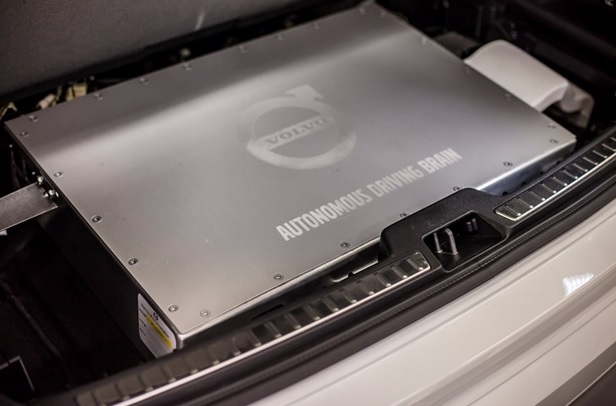 The image above simply depicts the size and shape of one of the better brains of a driverless bus (note that the name “brain” is stamped on the cover of this device) and the ease of removing it. Unfastening a few screws, pulling a plug or two and disconnecting a few wires, one can release and remove it. Otherwise, the volume, range and diversity of information captured by such a device (much less for something its size) would have been considered extraordinary two decades ago, emerging from the DOS era as we were.

What is interesting, and the focus of this installment, is the glaring disparity between the magnitude of information available about a vehicle or driver’s performance and the general disinterest in examining it.

This disparity is not a technological problem. It is largely an institutional and attitudinal problem. Or one might characterize it as a cultural problem. Or a values problem in a money-oriented society. Nevertheless, it raises an important point about driverless vehicles: While a vehicle’s brain may contribute to and/or improve safety (fewer accidents and incidents) and performance (e.g., better mileage, less pollution), this brain’s extraordinary analytical capabilities may be pointless because no non-robot is likely to ever examine the data.

The disinterest in information, feedback and accountability is not a historical characteristic of Americans. Nor is it a characteristic endemic to the public transportation industry. Decades ago, those small circular surfaces between the lug nuts in one of a bus’ outside rear wheel hubs were fitted with tachographs (a device most common on schoolbuses of that era). A mechanic who knew how to interpret its recordings could peel off this cardboard disc and, from it, learn a considerable amount of information about a vehicle’s braking, acceleration and speed — among other variables. During that era, law enforcement officers were often trained to read tachographs, and often pulled them immediately after an accident to help determine its cause. Yet now, with an exponentially-greater volume of information available from black boxes and video-cameras, the data from these devices are rarely examined. This trend is troubling in light of the information available from the brain of a driverless vehicle.

Vehicle-to-vehicle and vehicle-to-pedestrian collisions are commonplace in America. There are literally millions of them every year. But with previous few exceptions, law enforcement officials almost never pull the vehicles’ “black boxes” or video drives other than in catastrophic collisions involving at least one large vehicle (bus, motorcoach, schoolbus, truck or train). When transit officials do, it is usually to destroy, misplace or spoliate them. More than a few times, I have reviewed brilliantly-doctored videos of transit incidents that might impede or prevent one from viewing evidence that would otherwise hang these agencies (or their contractors) out to dry. Many judges either seem to not mind, or the plaintiffs’ attorneys fail to make the issue about this spoliation the “big deal” it truly is.

Similar things happen in the schoolbus sector. As in the transit sector, no one ever monitors a video unless and until something specific happens. In the schoolbus sector, drives are usually pulled only to convince parents that their little angel actually did what the driver reported.

In truth, the reason this information is rarely accessed in either of these sectors is twofold:

Another reason video-camera drives are not pulled is that, simply left in place, their data will be overwritten.  Whether true or a fairy tale, at least one major transit agency claims that its videos must be “triggered” to engage when the vehicle encounters some level of g-forces. This is how most bus-mounted video-camera technologies operated in their infancy nearly 20 years ago. These products have long-since evolved to  capture multiple images in “real time” and to store them for a reasonable amount of time.

The point of all this is: Why should taxpayers fund technologies whose data will be rarely be examined? This conundrum will be resolved somewhat as HAV technologies continue helping us avoid accidents and incidents. Just the same, these more-and-more costly technologies will be introduced into a culture almost hostile to consulting data collected for analytical purposes.

The understandable suspicion and instinctive fear of driverless vehicles (along with public pressure) threatens to change the current cultural dynamic of ignoring information to escape accountability. When a vehicle becomes driverless, I suspect the public will want to know a lot more about its failures. Much of this may simply be because the blame for such failures will likely shift from management and drivers (since there will be fewer managers and no drivers) to manufacturers, suppliers and their software developers.

This reality has both pros and cons. We have seen this movie before. Transportation network companies (TNCs), like Uber, Lyft, Sidecar and Juno, fearlessly entered the public transportation arena with no driver training, no management, ad hoc maintenance, no monitoring of regulatory compliance (like the performance of pre- and post-trip inspections), no schedulers, no dispatchers and no supervisors. The reason for this is obvious: How can an accident victim sue an app?

On the plus side of an incident involving an HAV — at least for the victims — the principal codefendants will at least have “deep pockets.” At the same time, in this “all-or-nothing” legal environment, I have a hard time envisioning a plaintiff’s counsel winning a case against an app, or the manufacturer of an HAV and/or its brain. In our current litigation environment (at least in the transportation sector), most plaintiffs’ attorneys earn money “by volume.” If it requires an attorney a full month’s work to extract the million dollars a case might be worth if prosecuted responsibility, that same attorney can make twice as much money by settling 10 such cases, for a fifth of their value, if doing so requires only two days’ work on each one.

Defendants, their attorneys and insurance carriers are well aware of these dynamics, and appear to take advantage of them. Without these dynamics, most public transportation sectors would likely care whether or not their drivers secured wheelchairs. Or transit agencies would add enough time to their routes’ schedules for boarding passengers to reach a seat or stanchion before the bus pulls away from the stop.  But given the tendencies of most plaintiffs’ attorneys, it is likely cheaper to simply settle the lawsuits at a discount, and save a lot more money by continuing to commit the “safety compromises” that speed up operations — even while these compromises contribute to roughly half of all public transportation-related accidents and incidents.

As a footnote to this generality, it must be emphasized that while the U.S. legal community is fairly uniform in its settlement tendencies, the safety aberrations of all public sector modes are not equal or even similar. Schoolbus schedules are generally not tight. And rarely does a schoolbus leave a stop before all the passengers are fully seated. The same is largely true in most motorcoach operations — the exception being commuter/express services provided by, or under contract to, a transit agency.

The commission of certain safety compromises, like the failure to secure a wheelchair, differs radically among public transportation sectors:

These examples, and their tendencies by mode, are important in the context of accountability. By examining an accessible vehicle, I myself can usually tell if a wheelchair had been secured when the incident occurred — even when, immediately after a tipover, the driver had picked up the chair, secured it, and plopped the victim back into the chair as though nothing had happened. But few others know what I know about this incident scenario, or can find what I can with a simple vehicle inspection (see wheelchairtipovers.com). Yet such a determination may become far easier when the brain of a driverless vehicle is fully-developed to record multiple nuances of a vehicle’s movement and performance, and the use of its equipment.

In simple terms, accountability will be a cinch with driverless vehicles. And there should be far less resistance to it since the blame will be shifted from the driver, management and policy-makers to vehicle manufacturers and their providers of artificial intelligence-based devices and their appendages.

The difference between what is possible and what will actually happen is an abyss. The evolution of safety technology often does not translate into improved safety. It did with improvements like ABS brakes, improved tire technology and convex rear-view mirrors, to name a few of the most obvious. But despite the outrageously-costly and needlessly-digital posi-train control technology that is often not even engaged, our passenger rail services continue to experience derailment after derailment — when the technology to prevent such incidents is as old as rail technology itself.

These observations suggest that the purpose of technology is not to install it. The purpose is to use it. Yet most regulations merely require the installation of safety-related equipment. Few regulations require its usage. A salient example of this is passenger seatbelts (for both ambulatory passengers and wheelchair users). Installation is mandated by numerous regulations, like the ADA for three-point seatbelts at all wheelchair securement positions. Yet the only requirements for usage of a seatbelt of any kind, in any mode, or for any type of passenger, exists in New Jersey, for schoolbuses of all sizes. Curiously, NJ regulations only require lap belts — known to be profoundly dangerous, even with the compartmentalized seats that all schoolbuses have.

As a final footnote about liability, what attorney can handle a case involving an HAV accident? Such attorneys may find someone like myself who knows what a human driver and/or his or her management should do. But where is this attorney going to find as an expert on artificial intelligence and its application to ground vehicles? What attorney would even understand such an expert, even if the attorney could find one and hold still long enough to listen to the details? And how could a plaintiff’s attorney complain about an HAV accident when the accident record for human-driven vehicles is so extensive — much less where the examination of the evidence by a good expert may uncover scores of errors and omissions?   All this suggests that, well into the future, HAV manufacturers and their suppliers, along with the agencies and companies that deploy their products, will enjoy a long hiatus of impunity.

At the same time, HAV manufacturers will be on their best behavior for a good while, even if only commercially (and not concerned with their litigation advantages). So at least initially, manufacturers, suppliers and customers alike may keenly tune into safety. And they may take long, hard looks at the data generated. If we are lucky, these will become good habits.

Perhaps at some point, if and when the legal community catches up with some  understanding of the technology, the liability will swing from drivers, management and policy-makers to the designers of artificial intelligence and the OEMs and suppliers which incorporate it into their products. Then, perhaps, the humanoids who actually make policy and management decisions may decide to continue examining the data these technologies make available.  One may assume that they do not do so now, with conventional vehicles, only because they themselves are held accountable for the failures. But this may change if and when these individuals can blame someone or something else for them. The fear is that it may not. The hope is that it will.